Hidden away below the surface of the sea is a fascinating world packed with beauty and mystery, but not everyone has the chance to head down there and explore it; however, this doesn’t mean there aren’t other ways to allow us all to experience the thrill of an underwater dive.

Divers with the right training, an expert eye and the appropriate equipment can transmit what they see and feel through photos and videos, allowing people all over the world to get a closer look at the wonders of the underwater world.

The first attempts at underwater photography date back to the mid-1800s, and the first film to 1914, but what really launched this discipline was the journey made in 1955 by Jacques-Yves Cousteau and Luis Marden aboard the Calypso, during which they took the first sequence of colour photographs under water, which were then published in National Geographic.

This endeavour was followed by a phase involving research into new technologies and the development of innovative techniques to take photos and shoot film of increasing quality under water; thanks to all these efforts, today anyone can admire richly detailed images of underwater landscapes and aquatic life, immortalised by photographers and videomakers specialised in diving.

Among these is Roberto Rinaldi, the star of the third Suex Story. 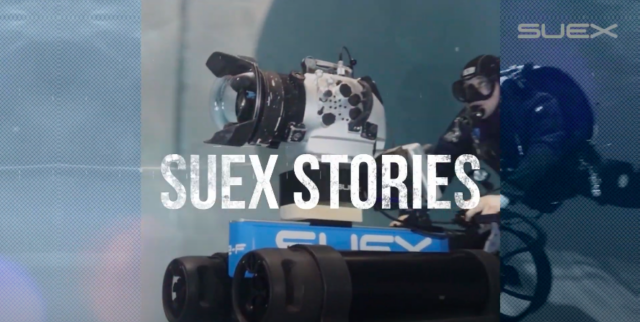 Roberto’s photographs and video material have appeared, to mention just a few, in National Geographic and on Discovery Channel, France 2, BBC, Rai TV and Sky, and he has worked on a number of films, such as The Odyssey by Jérome Salle and The Treasure of the Wreck of the Unbelievable of Damien Hirst.

His works, however, require high-performance, adaptable underwater equipment, so over the years he has developed a close collaboration with Suex.

Suex pays close attention to continually improving the experience of all divers, including underwater photography and videomaking aficionados, so the company provides them with a wide range of accessories for attaching their equipment, and new solutions are being developed all the time, thanks to the input of experts such as Roberto.

“Suex scooters allow us to move quickly under water, but straight ahead”, explains Roberto. “Marco (Segatto, the owner of Suex) has allowed me to fulfil an idea I had had for a while now, creating an immediately operative prototype in just a short time”.

This innovative system makes it possible to rotate the underwater camera around its support, to capture every detail of the underwater environment without changing the path of the DPV scooter: it’s a new start for new filming opportunities, because no one had ever come up with solutions like this before.