Archaeology allows us to learn more about our past, helping us to understand the road our civilisation has taken to where we are today.

This type of research is not always easy, however, and often requires dealing with hostile environments, such as vast deserts, icy tundras, the depth of the jungle, the darkest caves and deepest waters.

The bottom of the sea was the destination of an ambitious archaeological expedition to explore a site unrivalled worldwide, located between Marettimo, Levanzo and Favignana, in Sicily, Italy.

This was the location, in 241 BC, of the Battle of the Aegates between Rome and Carthage, in which a clear victory of the former brought an end to the 23-year First Punic War.

So this stretch of sea is home to the remains of the oldest battlefield to have been discovered so far, illustrating the beginning of Rome’s rise as a superpower of the ancient world, taking the place of the Carthaginian Empire and establishing its dominion over the sea and in war.

Access to this historical treasure is no easy task, however, since it lies at a depth of 80 metres, spread over an area with a sandy bottom, measuring 4 kilometres long and 3 kilometres wide, in a stretch of sea blown battered by strong underwater currents.

So it is a unique archaeological site also because of how difficult it is to reach. This is why the operation was entrusted to the expert divers of the SDSS, Società per la Documentazione di Siti Sommersi (Society for the Documentation of Submerged Sites).

The project was headed by Mario Arena, who in this Suex Story tells us how the team tackled this difficult challenge, and how Suex helped them to overcome it. 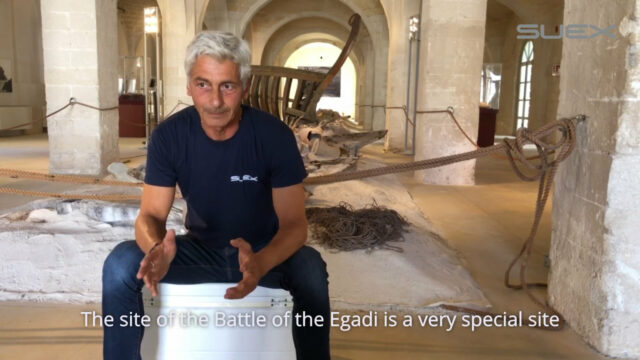 For this unprecedented expedition, Mario explains, the operation had to be organised from scratch, with specific solutions tailored to these particular circumstances.

To overcome the currents, the support craft was positioned 200/300 metres from the site, upstream from the current so as to offset the shift caused by it.

Once the team reached the bottom, the waters were calmer, allowing them to concentrate on the next challenge: identifying the remains of the battle concealed by the sand.

Divers have a better visual search capacity then robots, because sediments and rocks interfere with electronic instruments, and divers are quicker and more gentle at handling the finds and preparing them for bringing them to the surface; they are also more efficient at preparing grids and at photogrammetry.

However, these activities were carried out supporting the weight of the water column above.

The depth of the site meant that the ascent took 3/4 hours for decompression, moving back up through the sea currents and thus running the risk of being swept away and getting lost at sea.

Swimming would have been impossible, so a DPV scooter had to be used; not just any one, however, because advanced technology was required to successfully tackle all the challenges the expedition presented and to bring to light an important piece in the jigsaw of human history.

This is why Mario Arena and the SDSS team chose Suex DPVs, because they offer:

Suex also assisted the operation by developing a project proposed by the SDSS team to exploit the front aspiration and rear propulsion generated by the rotor to remove sediment from the findings once they are uncovered.

Our DPV scooters are the allies of divers worldwide, from explorers like Mario Arena to aficionados seeking to discover the underwater world.